On Saturday, September 16, 1972 a grisly discovery was made when the trunk of a vehicle belonging to 19-year-old Indiana State University sophomore Pamela Milam was opened. The young co-ed had planned on spending the weekend on campus to attend some scheduled Sigma Kappa sorority events but had gone missing on the Friday night.

While she commuted to school each day, she was expected to stay at one of the rooms the sorority had on campus. Pam had left her sorority sisters on Friday night to move her car closer to the dorm, promising to be back in a few minutes. She never returned and missed her 8:00 am shift she was scheduled to work the following day at the library.

After she was reported missing, Pam’s father and sister spent the day searching the campus for the missing student.

Body Of Pamela Milam Located In The Trunk Of Her Car

Pam’s 1964 Pontiac Lemans was located parked at the campus around 7:00pm Saturday night by two of her sorority sisters. Her glasses were seen through the rear window of the car and her purse was in the back seat. 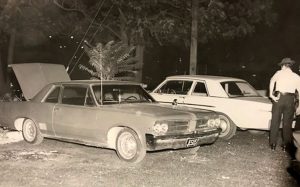 Pamela’s father arrived with a spare set of keys and when the trunk of her car was opened, Pam was found dead inside. She had been bound with clothesline and her mouth was gagged. Pam’s body was bruised and she had wounds on her head and face.

An autopsy was conducted by Coroner Dr. Robert Blake and the cause of death was determined to be strangulation.

No witnesses to the murder of Pamela were found nor were there any descriptions of who may have been responsible for her death. Authorities were tasked with trying to find who killed the young co-ed on the night of September 15th.

Police suspected that the person responsible for Pamela’s death might very well be Robert Wayne Austin. He had been arrested after a series of abductions and abduction attempts of students on the campus seven weeks after Pamela’s murder.

Austin would sexually assault his abductees and return them to the Indiana State campus. Austin would eventually be convicted of rape, sodomy and kidnapping and sentenced to life in prison. He denied having any connection to the Milam murder and police were never able to uncover concrete evidence to connect him to the crime.

With no new information, the case would go cold and remain so for decades.

DNA Eliminates Austin As A Suspect

Indiana State Police would reopen the investigation in 2001, analyzing a stain on Milam’s clothing to try once again to connect Austin to the murder using DNA evidence. Instead of connecting him to Pam’s murder, they would eliminate him as a suspect as the DNA profile created did not match Austin. 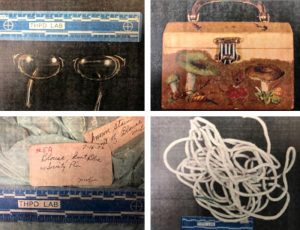 Investigators would also use new technology to analyze a fingerprint located on Pamela’s glasses as well as those located on the door of Pamela’s car. Those prints did not match Austin either or any of those stored in the Automated Fingerprint Identification System (AFIS).

The profile generated from the DNA sample was entered into the FBI’s CODIS database but didn’t trigger a match to any known offender.

Terre Haute Police Chief Shawn Keen re-opened the case in 2008 looking for further DNA evidence and the 56 males named in the files kept for the cold case. The clothesline used to bind Milam provided a partial profile using touch DNA that established a single male suspect when referenced to the profile created from the stain on Pamela’s blouse.

Despite new efforts to locate Pamela’s killer, the case remained cold until 2018 when the DNA samples were compared to those submitted to genealogy websites and services hoping for a hit from samples stored from customers. Keen had attempted to do the same in 2009 but his request was denied due to Indiana State laws at the time.

When familial testing or “forensic genealogy” became a legal investigation tool, Keen teamed with Parabon Nanolabs Inc to compare the DNA profile with those collected by genealogy websites and companies. 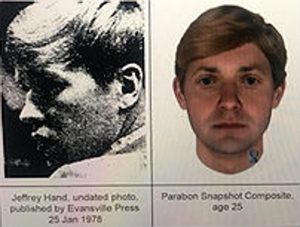 The family tree of the hit was investigated and further DNA samples were analyzed, Jeffrey Lynn Hand was identified as the killer. DNA samples from Hand’s widow and his two sons helped link him to the stain found on Milam’s blouse.

Hand would have been 23-years-old at the time of Pam’s murder. While the exact circumstances of how the two crossed paths is unknown, Chief Keen believes it was completely random as Hand had not been enrolled at Indiana State and worked as a delivery man for a record company.

Hand had previously been arrested in 1973 for picking up a couple who had been hitchhiking and murdering the husband. The Evansville woman was able to escape but police found the husband dead, having been stabbed and shot in the head.

During the trial he was found not guilty by reason of insanity and released from prison in 1976.

Hand was killed by police in 1978 while attempting to abduct a woman at the Markland Mall in Kokomo, located about 130 miles northeast of where Milam was killed. The kidnapping attempt was witnessed by an off-duty sheriff’s deputy who intervened to stop the abduction. Hand shot the deputy twice before being shot and killed by a city officer who was on the scene.

All the evidence was reviewed by Vigo County Chief Deputy Rob Roberts and Chief Keen. The two are in agreement that were Hand still alive today, there would be sufficient forensic evidence to bring him to trial and convict him for the murder of Pamela Milan.

After 47 years Milam’s family finally has closure knowing the identity and the fate of the person responsible for the death of their loved one.

On Saturday, September 16, 1972 a grisly discovery was made when the trunk of a vehicle belonging to 19-year-old Indiana State University sophomore Pamela Milam was opened. The young co-ed had planned on spending the weekend on campus to attend some scheduled Sigma Kappa sorority events but had gone missing on the Friday night. While she commuted to school each day, she was expected to stay at one of the rooms the sorority had on campus. Pam had left her sorority sisters on Friday night to move her car closer to the dorm, promising to be back in a few…